Life-cycle events, or rites of passage, occur throughout a Jew's life that serves to strengthen Jewish identity, and bind him/her to the entire community.

Welcoming male babies into the covenant through the rite of circumcision on their eighth day of life. The baby boy is also given his Hebrew name in the ceremony. A naming ceremony intended as a parallel ritual for girls, named zeved habat, enjoys limited popularity. 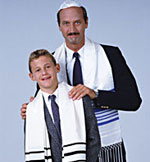 This passage from childhood to adulthood takes place when a female Jew is twelve, and a male Jew is thirteen years old among Orthodox and some Conservative congregations.

In the Reform movement, both girls and boys have their bat/bar mitzvah at age thirteen. This is often commemorated by having the new adults, male only in the Orthodox tradition, lead the congregation in prayer and publicly read a "portion" of the Torah.

Marriage is an extremely important lifecycle event. A wedding takes place under a chupah, or wedding canopy, which symbolizes a happy house. At the end of the ceremony, the groom breaks a glass with his foot, symbolizing the continuous mourning for the destruction of the Temple, and the scattering of the Jewish people.

Judaism has a multi-staged mourning practice. The first stage is called the shiva (literally "seven," observed for one week) during which it is traditional to sit at home and be comforted by friends and family, the second is the shloshim (observed for one month) and for those who have lost one of their parents, and there is a third stage, avelut yud bet chodesh, which is observed for eleven months.