Buddhism is a family of beliefs and practices considered by most to be a religion. 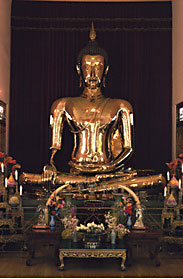 Buddhism is based on the teachings attributed to Siddhartha Gautama, commonly known as "The Buddha" (the Awakened One), who lived in the northeastern region of the Indian subcontinent and likely died around 400 BCE. Buddhists recognize him as an awakened teacher who shared his insights to help sentient beings end their suffering by understanding their true nature. The goal is to escape the cycle of suffering and rebirth (sa?sara), achieving Nirvana.

Among the methods various schools of Buddhism apply towards this goal are: ethical conduct and altruistic behavior, devotional practices, ceremonies and the invocation of bodhisattvas, renunciation of worldly matters, meditation, physical exercises, study, and the cultivation of wisdom.

Buddhism is broadly recognized as being composed of two major branches:

While Buddhism remains most popular within these regions of Asia, both branches are now found throughout the world.

Buddhist schools disagree on what the historical teachings of Gautama Buddha were, so much so that some scholars claim Buddhism does not have a clearly definable common core. Significant disagreement also exists over the importance and canonicity of various scriptures.

Various sources put the number of Buddhists in the world at about 355 million. While formal conversion or membership varies between communities, basic lay adherence is often defined in terms of a traditional formula in which the practitioner takes refuge in The Three Jewels: the Buddha, the Dharma (the Teaching of the Buddha), and the Sangha (the Community of Buddhists).

Life of the Buddha 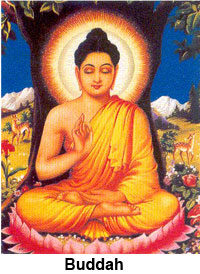 The following information about Buddha's life comes from the Tipitaka (other scriptures, such as the Lalitavistara Sutra, give differing accounts).

Shortly thereafter, a wise man visited his father, King Suddhodana. The wise man said that Siddhartha would either become a great king (chakravartin) or a holy man (Sadhu) based on whether he saw life outside of the palace walls. Determined to make Siddhartha a king, Suddhodana shielded his son from the unpleasant realities of daily life. Years after this, Gautama married Yasodhara, with whom he had a son, Rahula, who later became a Buddhist monk.

At the age of 29, Siddhartha ventured outside the palace complex several times, despite his father's wishes. As a result, he discovered the suffering of his people through encounters with an old man, a diseased man, a decaying corpse, and an ascetic. These are known among Buddhists as "The Four Sights", one of the first contemplations of Siddhartha.

The Four Sights eventually prompted Gautama to abandon royal life and take up a spiritual quest to free himself from suffering by living the life of a mendicant ascetic—a respectable spiritual practice at the time. He found companions with similar spiritual goals and teachers who taught him various forms of meditation, including jhana.

Ascetics practiced many forms of self-denial, including severe undereating. One day, after almost starving to death, Gautama accepted a little milk and rice from a village girl named Sujata. After this experience, he concluded that ascetic practices such as fasting, holding one's breath, and exposure to pain brought little spiritual benefit. He viewed them as counterproductive due to their reliance on self-hatred and mortification.

He abandoned asceticism, concentrating instead on anapanasati meditation (awareness of breathing), thereby discovering what Buddhists call the Middle Way, a path of moderation between the extremes of self-indulgence and self-mortification.

Under The Bodhi Tree He Is Enlightened

After discovering the Middle Way, he sat under a sacred fig tree, also known as the Bodhi tree, in the town of Bodh Gaya, India, and vowed not to rise before achieving Nirvana. At age 35, after many days of meditation, he attained his goal of becoming a Buddha.

After his spiritual awakening he attracted a band of followers and instituted a monastic order. He spent the rest of his life teaching the Dharma, traveling throughout the northeastern part of the Indian subcontinent.

Scholars are increasingly hesitant to make unqualified claims about the historical facts of Gautama Buddha's life. According to Michael Carrithers, while there are good reasons to doubt the traditional account, "the outline of the life must be true: birth, maturity, renunciation, search, awakening and liberation, teaching, death." Most historians accept that he lived, taught and founded a monastic order, but do not consistently accept most details in his biographies.

If you would like to keep in touch with news on the major religions, sign-up for our newsletter.

For Email Newsletters you can trust

Judaism says there's a God, and the way to him is to fulfill God's will which is found most clearly in The 10 Commandments.

Islam says there is a God (ALLAH), but the way to him is that we must obey Muhammad, and therefore, the discipline of the Koran's teachings.

Hinduism says that there is a God (Brahman), but we have to go through reincarnations to get to him, from sub-human form to human form, to improve the soul.

Christianity says there is a God, Jesus died on the cross for our sins (he removed that burden from us), and he is the way to God.

This book is succinct, and gets to the core issue -- the key questions.

And you don't have to read all the books in the bookstore and the library to understand the differences among the major religions.

Further, this book makes it simple: its asks the same questions of each religion as to its beliefs and teachings.

What does each religion teach as to a Creator? Is There a God?

Each religion's role, their purpose?

To take the next step, order this book: