Islam is a monotheistic, Abrahamic religion (based on the same Abraham as in Christianity and Judaism) originating with the teachings of the Islamic prophet Muhammad, a 7th century Arab religious and political figure. 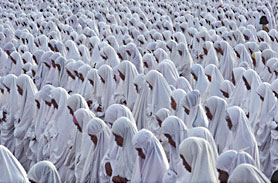 The word Islam means "submission", or the total surrender of oneself to God. An adherent of Islam is known as a Muslim, meaning "one who submits".

There are between 1.2 billion Muslims, making Islam the second-largest religion in the world, after Christianity.

Muslims believe that God revealed the Qur'an (the English word is 'Koran') to Muhammad, God's final prophet, through the angel Gabriel. They regard the Qur'an and the Sunnah (words and deeds of Muhammad) as the fundamental sources of Islam. They do not regard Muhammad as the founder of a new religion, but as the restorer of the original monotheistic faith of Abraham, Moses, Jesus, and other prophets.

An Introduction to Islam

Islamic tradition holds that Jews and Christians distorted the revelations God gave to these prophets by either altering the text, introducing a false interpretation, or both.

Islam includes many religious practices. Adherents are generally required to observe the Five Pillars of Islam, which are five duties that unite Muslims into a community.

In addition to the Five Pillars, Islamic law (sharia) has developed a tradition of rulings that touch on virtually all aspects of life and society. This tradition encompasses everything from practical matters like dietary laws and banking to warfare and welfare.

Almost all Muslims belong to one of two major denominations, the Sunni (85%) and Shi'a (15%). The schism developed in the late 7th century following disagreements over the religious and political leadership of the Muslim community.

Islam is the predominant religion in much of Africa and the Middle East, as well as in major parts of Asia. Large communities are also found in China, the Balkan Peninsula in Eastern Europe and Russia.

There are also large Muslim immigrant communities in other parts of the world, such as Western Europe. About 20% of Muslims live in Arab countries, 30% in the Indian subcontinent and 15.6% in Indonesia, the largest Muslim country by population. 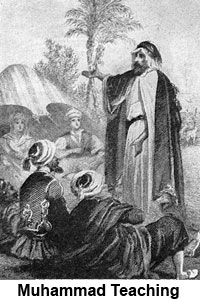 The word Islam is a verbal noun originating from the triliteral root s-l-m, and is derived from the Arabic verb Aslama, which means "to accept, surrender or submit." Thus, Islam means acceptance of and submission to God, and believers must demonstrate this by worshipping him, following his commands, and avoiding polytheism.

The word is given a number of meanings in the Qur'an. In some verses (ayat), the quality of Islam as an internal conviction is stressed: "Whomsoever God desires to guide, He expands his breast to Islam."

Other verses connect islam and din (usually translated as "religion"): "Today, I have perfected your religion (din) for you; I have completed My blessing upon you; I have approved Islam for your religion."

Still others describe Islam as an action of returning to God — more than just a verbal affirmation of faith. Another technical meaning in Islamic thought is as one part of a triad of islam, iman (faith), and ihsan (excellence); where it represents acts of worship (`ibadah) and Islamic law (sharia).

As a historical phenomenon, Islam originated in Arabia in the early 7th century. Islamic texts depict Judaism and Christianity as prophetic successor traditions to the teachings of Abraham. The Qur'an calls Jews and Christians "People of the Book" (ahl al-kitab), and distinguishes them from polytheists. Muslims believe that parts of the previously revealed scriptures, the Tawrat (Torah) and the Injil (Gospels), had become distorted — either in interpretation, in text, or both.

The Qur'an states that all Muslims must believe in God, his revelations, his angels, his messengers, and in the "Day of Judgment". Also, there are other beliefs that differ between particular sects.

Muslims believe that God revealed his final message to humanity through the Islamic prophet Muhammad via the archangel Gabriel (Jibril). For them, Muhammad was God's final prophet and the Qur'an is the revelations he received over more than two decades.

In Islam, prophets are men selected by God to be his messengers. Muslims believe that prophets are human and not divine, though some are able to perform miracles to prove their claim. Islamic prophets are considered to be the closest to perfection of all humans, and are uniquely the recipients of divine revelation — either directly from God or through angels.

The Qur'an mentions the names of numerous figures considered prophets in Islam, including Adam, Noah, Abraham, Moses and Jesus, among others. Islamic theology says that all of God's messengers since Adam preached the message of Islam — submission to the will of God. Islam is described in the Qur'an as "the primordial nature upon which God created mankind", and the Qur'an states that the proper name Muslim was given by Abraham.

The Second Part of the Above Video

9/11 changed life for all Americans.

On everyone's mind are these questions:

"Who are these terrorists who slaughter in the name of Islam?"

"What are they trying to achieve?"

So, the question is "What is the difference between this religion, Islam, and all the others?"  The majors -- Judaism, Hinduism, Christianity, Buddhism, and of course, Islam.

This very question is covered in the book, but the short version is simply this: Islam has over-zealous leaders who teach that they have a scared mission, "by force of persuasion" to bring the whole world under their dominion.  And then the book explains "why."

It's necessary to explore the Teachings and Beliefs of these major religions.

So, the book asks the same questions of each religion.  What does each religion teach, and what do they believe,

as to a Creator? Is there a God?

the origin of the universe, our planet Earth?

the origin of evil and suffering?

about reconciling with God?

Finally, what does each religion teach as to their role, their purpose?

The book is easy to understand, to the point.

The better news is that you don't have to read the whole library to understand the differences among the religions.

Yes, the book briefly touches on the other isms.

That is to say, Humanism, Narcissism, Agnosticism, Monism (New Age), Atheism, and the like. But, the main focus is on the major religions.


Muslims believe that God revealed the Qur'an to Muhammad, God's final prophet, through the angel Gabriel.