Hinduism is the predominant religion of the Indian subcontinent. 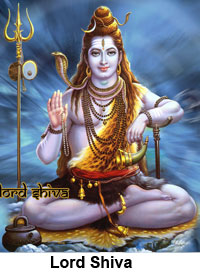 Hindu beliefs vary widely, with concepts of God and/or gods ranging from panentheism, pantheism, monotheism, polytheism, and atheism with Vishnu and Shiva being the most popular deities.

Other notable characteristics include a belief in reincarnation and karma, as well as personal duty, or dharma.

Among its roots is the historical Vedic religion of Iron Age India, and as such Hinduism is often stated to be the "oldest religious tradition" or "oldest living major tradition." It is formed of diverse traditions and types and has no single founder.

Hinduism is the world's third largest religion after Christianity and Islam, with approximately a billion adherents, of whom about 905 million live in India. Other countries with large Hindu populations can be found across southern Asia.

Hinduism's vast body of scriptures are divided into Sruti ("revealed") and Smriti ("remembered"). These scriptures discuss theology, philosophy and mythology, and provide information on the practice of dharma (religious living).

Among these texts, the Vedas and the Upanishads are the foremost in authority, importance and antiquity. Other major scriptures include the Tantras, the Agama, the Pura?as and the epics Mahabharata and Ramaya?a. The Bhagavad Gita, a treatise from the Mahabharata, spoken by Krishna, is sometimes called a summary of the spiritual teachings of the Vedas.

Hindu is the Persian name for the Indus River, first encountered in the Old Persian word Hindu (h?ndu), corresponding to Vedic Sanskrit Sindhu, the Indus River. The Rig Veda mentions the land of the Indo-Aryans as Sapta Sindhu (the land of the seven rivers in northwestern South Asia, one of them being the Indus). This corresponds to Hapta Hendu in the Avesta (Vendidad or Videvdad 1.18)—the sacred scripture of Zoroastrianism. The term was used for those who lived in the Indian subcontinent on or beyond the "Sindhu". In Islam the Arabic texts - al-Hind (the Hind) also refers to 'the land of the people of modern day India'. 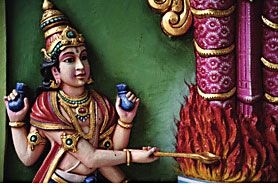 The Persian term (Middle Persian Hinduk, New Persian Hindu) entered India with the Delhi Sultanate and appears in South Indian and Kashmiri texts from at least 1323 CE, and increasingly so during British rule. Since the end of the 18th century the word has been used as an umbrella term for most of the religious, spiritual, and philosophical traditions of the sub-continent, excluding the distinct religions of Sikhism, Buddhism, and Jainism.

The term Hindu was introduced to the English. It generally denotes the religious, philosophical, and cultural traditions native to India.

Hinduism as we know it can be subdivided into a number of major currents. Of the historical division into six darshanas, only two schools, Vedanta and Yoga survive. The main divisions of Hinduism today are Vaishnavism, Shaivism, Smartism and Shaktism. The vast majority of present day Hindus can be categorized under one of these four groups, although there are many other, partly overlapping, allegiances and denominations.

McDaniel (2007) distinguishes six more generic "types" of Hinduism, in an attempt to accommodate a variety of views on a rather complex object:

I want to go to Heaven!

How do I get there?

The famous psychologist Carl Jung (CJ Jung Institute of Zurich and New York) was quoted as saying that he never had a patient, man or woman, over 40 whose problems did not root-back to fear of approaching death.

Through my readings and study and conversations, the very worst fears of humankind are death and eternal lostness.  It is not "where we came from" or "why we are here," it is the absolute fear of dying, and not going to Heaven.

The attractive aspect of this book is that it is succinct.  It gets to the core issues, the key questions.  You do not have to read the whole library to understand the differences among the major religions.

As to the understandable aspects of this book:

The majority of people do not ever attend either Church or Temple or Mosque or Synagogue, but they still think, and worry, about this stuff, this subject.  Why?  The book has an understandable answer to this understandable question.

What do they teach as to a Creator?  Is there a God?

Each religion's role, their purpose?

To take the next step, order our book.