Judaism - Doctrine and Principles of Faith

As noted, Judaism begins with the Covenant between God and Abraham. Most Judaic doctrine and principals spring from that agreement and from the early books of the bible. 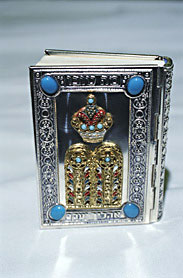 Historically, Judaism has considered belief in the divine revelation and acceptance of the Written and Oral Torah as its fundamental core belief, but Judaism does not have a centralized authority dictating religious dogma. This gave rise to many different formulations as to the specific theological understandings inherent in the Torah (the first five books of the Jewish Bible, the Jewish Scriptures), and Talmud (a collection of writings constituting Jewish teachings and commentaries related to the Jewish Scriptures).

As a result and over the centuries, a number of formulations of Jewish principles of faith have appeared, and though they differ with respect to certain details, they demonstrate a commonality of core ideology.

Of these formulations, the one most widely considered authoritative is Maimonides' 13 Principles of Faith, formulated in the 12th century. These principles were controversial when first proposed, evoking criticism.

Maimonides thirteen principles were ignored by much of the Jewish community for the next few centuries. Over time, two poetic restatements of these principles, which are titled "Ani Ma'amin" and "Yigdal," became canonized in the Jewish prayer book, and eventually became widely held.

Very early Jewish scholars (1400 A.D.) have criticized Maimonides' list as containing too many items that, while true, were not fundamentals of the faith, and thus placed too many Jews in the category of "heretic," rather than those who were simply in error.

Many others criticized any such formulation as minimizing acceptance of the entire Torah. As noted however, neither Maimonides nor his contemporaries viewed these principles as encompassing all of Jewish belief, but rather as the core theological underpinnings of the acceptance of Judaism.

Along these lines, the ancient historian Josephus emphasized practices and observances rather than religious beliefs, associating apostasy (rejection of the beliefs) with a failure to...

Today most Orthodox authorities hold that Maimonides' 13 Principles Of Faith are obligatory, and that Jews who do not fully accept each one of them are potentially heretical. Maimonides (1135 - 1204) was a Rabbi. He was a preeminent medieval Jewish philosopher, and one of the greatest Torah scholars of all time. He is the author of these...